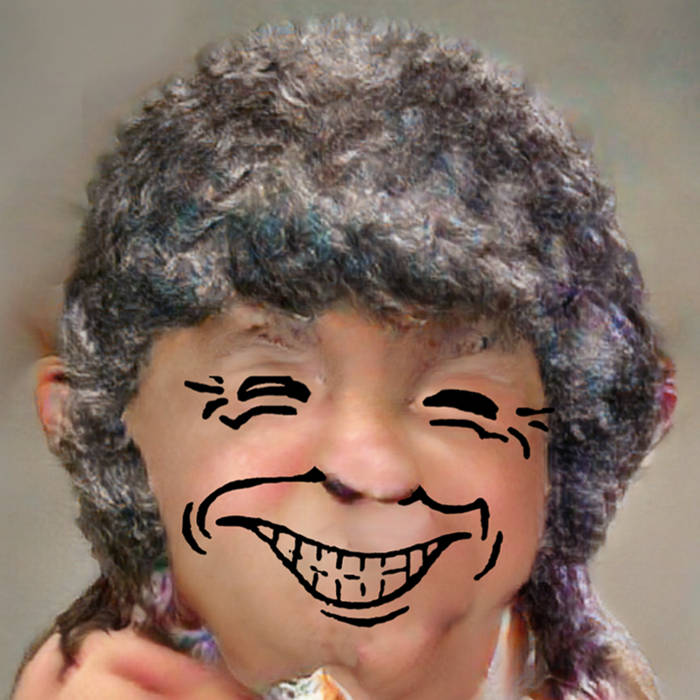 Ian M Fraser See that guy smiling on the cover? Thats me every time I listen to Nth White Dot. Each track stretches and folds with buoyant elasticity revealing hidden granular detail on each listen. Required listening for all computer music heads!

The core group of files used in these pieces was created in 2015 for a project that was never released. I found that any one-minute stretch of that body of work was interesting on its own, but that listening for longer periods induced a kind of fatigue; they were hyper-dense in a way that created an overall flatness that left no room for movement.[1]
I shelved the project and forgot about it until a couple of years later, when I was testing out some new spectral processing techniques, which formed the basis for a series of performances from May 2017 through August 2018.

2-oGen Squirt/Spectral Dummy & =8^• : The titular spectral dummy is the voice-like sounds that are created through entirely synthetic means, without the use of any vocal recordings. This was an attempt on my part to invite an experience of auditory pareidolia in the listener. My interest in synthetic pseudo voices is derived from a broader interest in experiences in which the ontological status of an environmental stimulus is in question as to whether it is a person (or perhaps an animal) or an inanimate object or phenomenon. Typically we rush to resolve this ambiguity as quickly as possible, such as when we turn with a start to see that the voyeur at the window is only a tree branch; the change from one to the other is so rapid as to seem binary. Having lived with a pair of black cats for several years, I spent many pleasant stretches of time reading on a couch believing that one of the cats was next to me, only to look up and realize that it was in fact a scarf or backpack. Less common, but of greater interest in terms of perceptual mechanics, are experiences in which the ambiguity is sustained, particularly if the ambiguity is robust enough to withstand prolonged inspection. I had one such experience many years ago at a Halloween party at the home of a set designer. My friends and I were conversing in the yard for some time near what we assumed was a holiday decoration: a mannequin lying face down in the grass, intended to represent a corpse in keeping with the morbid occasion. At some point it occurred to one of us that this supposed decoration might in fact be a real person. We crouched down around it to inspect it closer, but its long hair obscured its face entirely, and the bulky cold-weather clothing it was swathed in concealed its flesh well enough to preserve the illusion. One of us finally lifted the hair back to see that it was indeed a living person, albeit a severely intoxicated one.

Fffffffffffff: A few short samples of sounds generated in NI Razor were run through identical granularization templates and selectively layered. The narrative undergoes a schism in the final minute of the track, which introduces the system employed in the subsequent track (described below). Here, however, successive cycles of the system are superimposed and distributed across the stereo field instead of being dissected and temporally interlaced.

Eff Eff Eff Eff Eff Eff Eff Eff Eff Eff Eff Eff Eff: The composition method here bears resemblance to Rutherford Chang’s Alphabetized Newspaper, in which all the words from the front page of the May 12, 2004 edition of the New York Times were cut out by hand and rearranged alphabetically. The source for this piece was one of the 2015 files, which was sent through a nonlinear playback system with effects, the parameters of which were modified in related but asynchronous patterns. This process yielded an irregular cycle of short sounds that changed with each quasi-repetition, although the changes were subtle enough that each constituent sound in the cycle was recognizable through at least a few subsequent iterations. I then reorganized the sounds so that the individual iterations of each sound were arranged sequentially, rather than being grouped in a cycle with the other sounds. In other words, from
1 2 3 4 5 𝟙 𝟚 𝟛 𝟜 𝟝 𝟏 𝟐 𝟑 𝟒 𝟓 𝟷 𝟸 𝟹 𝟺 𝟻
to
1 𝟙 𝟏 𝟷 2 𝟚 𝟸 𝟐 3 𝟛 𝟑 𝟹 4 𝟜 𝟒 𝟺 5 𝟝 𝟓 𝟻,
the effect of which is to reduce the relationships among the individual sound objects to that of simple accumulation.[2] In this list-like configuration, the sequences of sound objects function similarly to different utterances of a single word, where the identity of the sonic unit is recognized across differences in inflection, speaker, and environmental acoustics.[3] The sounds are articulated at a rate of around 5-8 per second, comparable to the number of syllables per second in ordinary speech.[4] The sounds were arranged by hand on an unquantized timeline in Ableton Live to avoid metrical regularity.

Open RF+ Revision: Drawing further influence from patterns of speech, albeit in a more abstract vein, this track alternates between planar tonal sections and more convoluted movements comprising groups of voices in conversation, in which the stereo position and timbral character of individual lines are controlled to varying degrees by the activity of other members of the group.

The title Nth White Dot is a near-anagram of an enigmatic text message I received from an unknown number while touring this material along the west coast of the US: “Shot t Edwin.”

1 Gilles Deleuze & Félix Guattari, A Thousand Plateaus, University of Minnesota Press, 1987, p. 343: “Sometimes one overdoes it, puts too much in, works with a jumble of lines and sounds; then instead of producing a cosmic machine capable of ‘rendering sonorous,’ one lapses back to a machine of reproduction that ends up reproducing nothing but a scribble effacing all lines, a scramble effacing all sounds. The claim is that one is opening up music to all events, all irruptions, but one ends up reproducing a scramble that prevents any event from happening.” (Also cited in the liner notes of Modulation & Transformation 4, mille plateaux, 1999.)
2 Francis Spufford, The Chatto Book of Cabbages and Kings, Chatto & Windus, 1989: “Lists, however, divide, or leave divided, the things they include. They offer only the relationship of accumulation.” (quoted in Alien Phenomenology, or What It’s Like to Be a Thing, Ian Bogost, University of Minnesota Press, 2012, p. 40)
3 David Roden, Posthuman Life, Routledge, 2015, p. 81: “[S]ymbols are finitely differentiated (Goodman 1968: 135-6). A mark can only count as a symbol if it is possible to determine which symbol it is. This property allows us to recognize instances of common symbols across empirical variations in sound or shape…”
4 content.time.com/time/health/article/0,8599,2091477,00.html

sndtrak stops by with an Album of the Day Feature of his most recent release, FLIPS V1: Triple Lindy